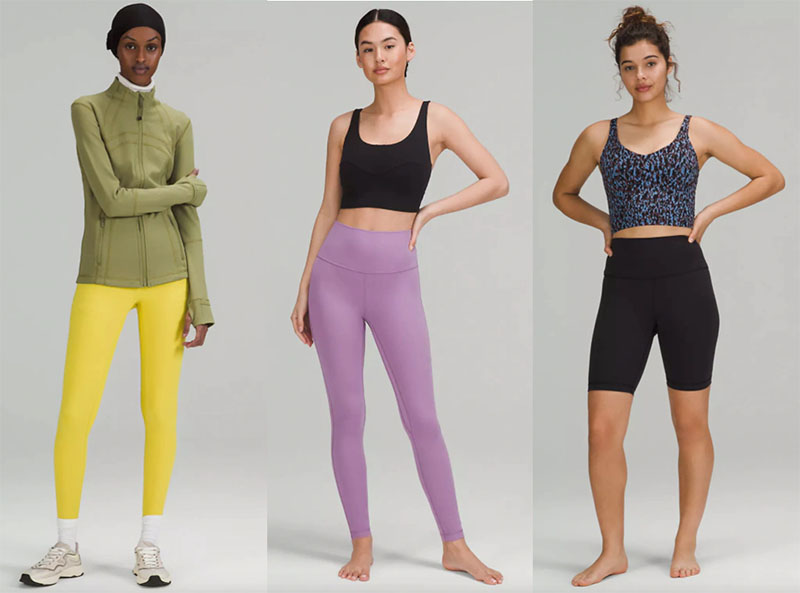 Walk into any yoga studio or juice bar in the country and you’re likely to find the signature Lululemon “A”-shaped logo on the back of leggings or a scuba hoodie. Lululemon Athletica has become practically synonymous with luxury yoga wear, but it’s increasingly becoming confused with the similar company named LulaRoe.

In 2021, a documentary called LulaRich debuted on Amazon Prime Video telling the story of the founding and downfall of multi level marketing company LulaRoe. Unsurprisingly, the docu-series left consumers confused as ever about the difference between Lululemon and LulaRoe.

While they are both known for their yoga pants, Lululemon and LulaRoe are drastically different clothing companies with very different business models.

Here’s everything you need to know about the similarities, differences, and the history of these two women’s clothing brands.

Is LulaRoe the same as Lululemon?

LulaRoe and Lululemon are NOT the same company. In fact, they have two radically different business models. Practically the only thing that these brands have in common is the “L’s” in their names and the fact that they sell leggings.

Lululemon Athletica is a global luxury athleisure brand selling yoga gear, athletic wear and lifestyle apparel. They sell both women and men’s clothing at an affluent price point. They are a publicly traded company (NASDAQ:LULU) headquartered in Vancouver, British Columbia.

Lululemon has a thriving ecommerce business (online store) as well as over 500 Lululemon stores around the world. Most importantly, Lululemon designs and manufactures their clothes and sells them directly to consumers, especially those interested in high-end athleisure wear.

On the other hand, LulaRoe is a relatively new company founded in Corona, California. They sell comfy, affordable, and trendy women’s lifestyle apparel online through “independent retailers”. LulaRoe is most known for their “buttery soft” leggings sold in bold patterns and prints. They have no brick-and-mortar stores.

LulaRoe is a MLM (multi-level marketing company) or “pyramid scheme” with many suspicious details recently exposed in the LulaRoe documentary LuluRich on Amazon Prime Video. Many lawsuits and investigative reports have uncovered sketchy ways in which the brand promised women a pathway to financial freedom, only to send them drowning in debt at the expense of the legging-centered pyramid scheme.

Moral of the story? LulaRoe and Lululemon both sell leggings and have “L’s” in their names, but that is the extent of their similarities. Lululemon is a luxury retail yoga brand, while LulaRoe is an MLM scheme that under fire for a range of moral and legal complications.

The brands are completely different and not at all related. Here’s more details on the two companies:

LuLaRoe is a community-focused women’s fashion brand with a mission to create freedom, serve others, and strengthen families through fashion. They want to help women feel beautiful, unique, and powerful in whatever they wear. This lifestyle apparel brand is centered around female empowerment and helping millennial women and struggling mothers gain financial freedom by working from home.

LuLaRoe is a multi level marketing company that relies on social media and a cult-like selling base. Customers can only purchase their clothes exclusively online from designated retailers.

These retailers are often individuals that buy LuLaRoe products online at wholesale prices and then sell them to their customers via a website or social media. Unlike Lululemon, LuLaRoe does not have any brick-and-mortar stores.

Mark and DeAnne Stidham founded LuLaRoe in 2013 to help others succeed through entrepreneurship, freedom, and service. LuLaRoe is a lifestyle apparel brand selling women’s clothing items and athletic wear.

They function via a “community of social selling entrepreneurs” or LuLaRoe Independent Fashion Retailers. These people purchase leggings from the company and re-sell them with their own online stores.

From the beginning, LuLaRoe founders say they have aimed to help people succeed through the opportunities that their company creates. They are a business created for families and community and actively promote themselves as an apparel brand as well as a family.

In 2017, LuLaRoe hit its first major roadblocks after the release of the LulaRoe documentary on Amazon Prime Video: LulaRich. A cascade of lawsuits, bad press, and legal issues followed, ultimately leading to millions of dollars in settlements and the closing of their California warehouse. BuzzFeednews wrote conducted an entire investigative piece on all the details.

After such bad press, the company is shockingly still in business. Everything appears to be carrying on as usual, including their infamous yearly LuLaRoe cruise for their top sellers. Their Instagram page is still highly active and many people remain huge fans of the brand. Customers still seem to love their leggings, dresses, and other fashion apparel printed in vibrant patterns.

Is LulaRoe named after Lululemon?

In spite of their similar spellings, Lululemon and LuLaRoe are NOT related. LuLaRoe got its name from founder Deanne Stidham’s first three granddaughters: Lucy, Lola, and Monroe. The brand name LuLaRoe is a combination of the “lu” from Lucy, the “la” from Lola, and the “roe” from Monroe.

Is LuLaRoe a pyramid-scheme?

Needless to say, LuLaRoe has a sketchy reputation at best. Ever since their disturbing documentary revealed how thousands of women bought into their legging-selling scheme, multiple class-action lawsuits and state regulatory bodies have accused LuLaRoe of being a classic cult-hyped pyramid-scheme.

After watching the LulaRich documentary, many viewers were also astonished by the founders’ emotional manipulation of mothers and women in their quest for success. As if it wasn’t enough to pay the $5,000 to $10,000 startup fee and sell wildly printed leggings, the company encouraged (and purportedly paid for) LuLaRoe consultants have weight loss surgeries in Tiuajana, attend cult-like celebrations and trips, and only wear certain clothes to represent LuLaRoe.

Co-founder Mark Stidham has especially been under fire for his “pseudo-feminist” actions and controversial statements about cashing out the company and fleeing to the Bahamas in the wake of millions of dollars of lawsuits.

Lululemon Athletica is a global athleisure company that sells high-end women’s and men’s clothing. Based in British Columbia, Lululemon began with a focus on yoga pants, leggings, sports bras, and other women’s clothing items. They have since expanded to an extensive line of men’s clothing for everything from yoga to running to streetwear.

They have an extensive line of yoga gear, including their infamous Align leggings, sports bras, and tank tops. Lululemon leggings are particularly notable for their expensive price tag and roaring fanbase.

Lululemon encourages community engagement, social impact, environmental responsibility, and personal empowerment. Their mission is to “elevate the world from mediocrity to greatness”.

Unlike LulaRoe, Lululemon Athletica is a standard clothing corporation that sells online and in-stores. They are not a pyramid scheme or MLM business model.

However, some people have described Lululemon followers as “cult-like”. Perhaps this “culty” view from outsiders is one of the main sources of confusion between LuLaRoe and Lululemon.

Their sleek style and innovative branding has garnered them attention for decades, but many have also wondered “why the heck would anyone pay $100 for a measly pair of leggings?”. Fortunately, most of their customers agree that the steep price point is backed up by their superior quality and attention to detail.

Check out our extensive articles about Everything You Need to Know About Lululemon and The Best Lululemon Sales, Discounts and Coupons (9 Ways to Save).

At well over $100 per pair, Lululemon pants and leggings are considered luxury yoga pants. Chip Wilson founded the brand with a passion for premium quality performance fabrics and textile manufacturing to create the best possible athletic experiences for their customers.

Lululemon designs and tests all of their merchandise in real-world sweaty sessions with top-level athletes. They also back all of their gear with a Quality Promise that stands behind their top-level workmanship.

Key Takeaways: LuLaRoe and Lululemon Have Almost Nothing In Common

In spite of their confusing names, LuLaRoe and Lululemon have almost nothing in common. Yes, they both have a bit of a “culty” vibe and a “women empowerment” message, but one is arguably far more legitimate than the other.

Be sure to check out the Top 7 Best Lululemon Leggings of All Time, Reviewed and A Full Lululemon Align Tank Review + Our Top 5 Dupes.

What do you think? Is LuLaRoe anything like Lululemon?