The Mala Beads Meaning And Symbolization 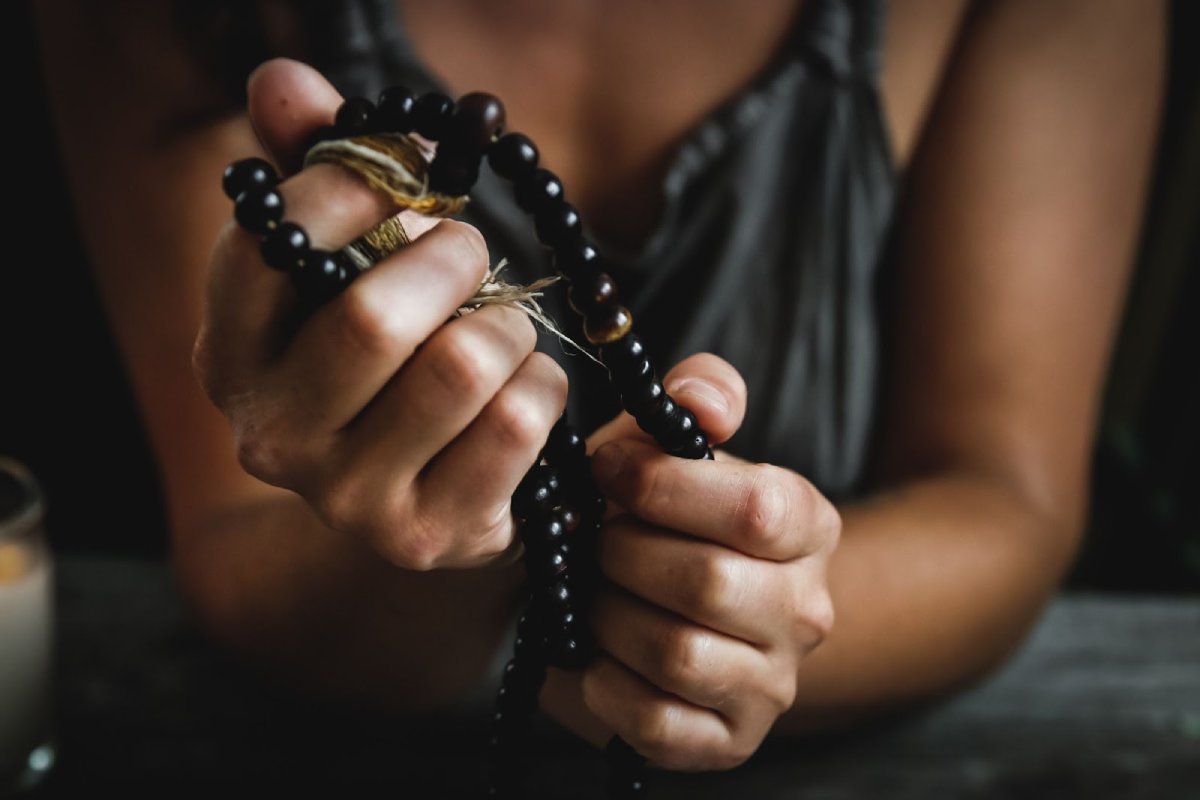 Mala beads are beautiful beaded jewelry you’ve likely seen yogis sporting around their neck or for sale in new age stores. These eye-catching accessories may look gorgeous, but they serve a purpose far more profound than aesthetics.

Malas have been around for thousands of years and have roots in various religions. Still, they are just as valuable today, serving as a helpful tool to stay focused while meditating. But what exactly is the meaning of mala beads, and how do you use them? Let’s find out.

A mala is a string of beads traditionally used to help the mind focus during meditation, prayer, or other spiritual practice. It is believed that mala beads originated from the Hindu religion in India thousands of years ago.

Traditionally, yogis and meditators would use them to count mantras during Japamala practice, a form of mantra meditation. Counting the beads helped meditators focus on the sounds, vibration, and meaning of the word they chanted.

However, mala beads are believed to have been around for even longer. Prayer beads, such as rosary beads, are used in various religions to help count prayers or devotional chants, similar to the purpose of the mala. They were first mentioned in a 4th Century BCE Buddhist text called Mokugenji Sutra.

Mala beads are not the same as worry beads, though, which are a much more recent creation. Malas have a spiritual purpose, whereas worry beads are purely used for relaxation, enjoyment, or to guard yourself against bad luck.

A mala bead necklace typically has 108 beads, allowing meditators to count mantras in sets of 108 repetitions. Many Buddhist prayer beads also have a tassel, representing the lotus flower, the symbol of higher consciousness.

What Does Mala Mean?

Mala is a Sanskrit word that translates to “Garland,” as in the decorative wreath. The term can also mean impurity, as using them helps remove any impurities that may stop you from reaching enlightenment.

They are also called Japa mala beads as the Sanskrit word “Japa” means “the muttering of a mantra.” Japa is also the name of the mantra meditation practice found in Hinduism, Jainism, Sikhism, and Buddhism.

Malas have exactly 108 beads, which is a symbolic number with sacred roots in Hinduism and Buddhism. In Hinduism, 108 symbolism dates as far back as the Vedas, particularly the Upanishads, in which there are 108.

The Sanskrit alphabet has 54 letters, half of 108. However, as each has feminine (Shakti) and masculine (Shiva) qualities, the letters multiply by 2, making 108.

In Buddhism, it is said that there are 108 earthly desires and 108 human delusions that prevent us from reaching enlightenment. Moreover, in yogic practice, 108 is also sacred as practitioners mark the passing of the seasons by performing 108 sun salutation flows.

How To Wear Mala Beads

While mala beads are traditionally a meditation tool, they are also widely worn around the neck or wrist. Wearing mala beads as a necklace or bracelet reminds you of your spiritual journey or intention and helps you center into your meditation. Wearing them throughout the day can also help you maintain the feeling of peace and groundedness you create in your meditation practice.

Many of us struggle to stay present. We spend most of the day anticipating the future or thinking about the past. So wearing mala beads can increase your self-awareness, allowing you to get out of your mind and become aware of your body and surroundings. Therefore, although malas have been used for thousands of years, they still serve a purpose today.

Is It Disrespectful To Wear Mala Beads?

Mala beads are traditionally used in sacred practice by Hindus and Buddhists. Therefore, you may wonder if it is disrespectful to wear them if you do not follow these religions.

It’s important to note that mala prayer beads are not reserved for religious practice. They can be used among meditators and spiritual seekers who do not associate themselves with any religion.

As long as you use mala beads for their intended purpose, such as to assist in meditation or find presence during the day, there is no disrespect. However, some people buy and wear mala beads purely for aesthetics.

As mala bracelets and necklaces have become popular in recent years, they can be seen as trendy accessories or jewelry. Under these circumstances, it can be considered cultural appropriation, just like if you have a Buddha statue in your home purely for decoration purposes.

How To Choose A Mala Bead?

Traditional mala beads are made from rudraksha seeds, semi-precious gemstones, sandalwood, or rosewood. However, today you can find ones made from glass or certain types of plastic. We recommend choosing seed, wood, or crystal mala beads as they all have unique healing properties that magnify the benefits you will receive.

For example, you can find mala beads made from specific crystals or gemstones corresponding to one or more of the seven major chakras. For instance, Rose Quartz, associated with the heart chakra, is a popular mala bead material. Therefore, your mala prayer beads can have energy healing qualities, too.

Another reason you should avoid mala beads made from glass or plastic is that the quality is usually lower than those made using traditional materials. However, aside from the material, you can see how high quality a mala necklace is from the construction of the string.

A high-quality mala will have knots hand-tied between each bead. On the other hand, lower-quality malas have no knots with the beads simply strung together or spacer beads instead. You should choose a mala with knots as they help your finger run over the beads in meditation, and the knots protect them from rubbing against each other.

If you intend to use your mala for meditation, ensure your first mala has a guru bead, also known as the Sumeru. The guru bead is the one in the center that looks different from the others, signifying the beginning and end of the chanting practice.

Guru beads are often made from a different material than the other beads, usually a healing crystal. You can look for one that contains a gemstone associated with a chakra you are balancing, such as Amazonite for the throat chakra.

You can find mala beads as either necklaces or bracelets. Mala necklaces are the traditional style and the most comfortable and convenient choice. Plus, many can also be worn as a bracelet by wrapping them around your wrist.

There are two different types of mala bracelets. The first has a layered style with 108 beads that you wrap around your wrist.

The other style has one layer, consisting of either 21 or 27 beads. If using the single-layer mala bracelets for meditation, layer 4 or 5 bracelets on your wrist so that you have the name number of beads as a full-length one.

Finally, if you like to make jewelry, you can get a mala craft kit. With this, you can make your own mala, totally personalized to you and infused with your chosen intentions.

As previously mentioned, the most common way to use mala beads is in mantra meditation. However, you can also use them in breath meditation or while holding yoga postures as a tool to help you stay focused on your breathing.

To meditate with mala beads, you should hold them in the right hand, with the mala draped over your middle finger. You start with the first counter bead next to the guru bead and hold each bead between your thumb (on top) and middle finger (below).

You then use your thumb to pull the next counter bead after each chant or breath. Once you reach the last counter bead, you either finish your meditation or continue for another 108 repetitions going back in the other direction.

According to ancient Indian beliefs, you should not touch the mala beads with your index finger as this finger represents ego. It is believed that the ego is the greatest obstacle in attaining enlightenment, which is the traditional purpose of meditation.

Some yoga practitioners also choose to wear malas or rosary beads throughout their practice to enhance the benefits. Wearing mala jewelry in a yoga session may help you stay connected to your intentions, settle your mind, or clear negative energy from your space.

Despite being an ancient tool for spiritual practices in India and beyond, the mala has many benefits in modern-day life. They can help with anxiety and stress reduction, remove negative energy from our auras, evoke peace, and find more focus and intention when we meditate.