What Are Mala Beads, How to Use Them, and The Best Ones to Buy 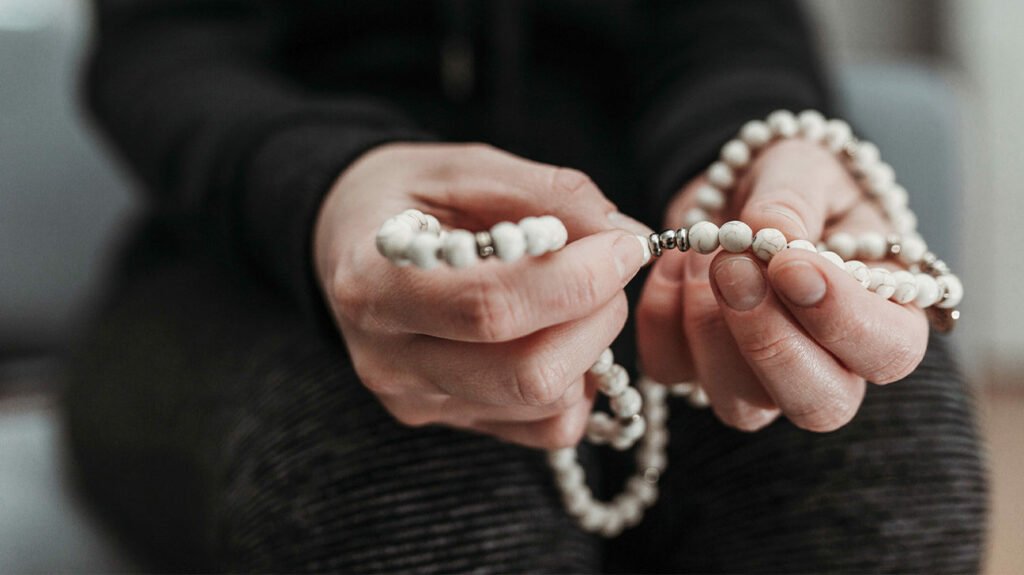 More than just a necklace: Mala beads have always been an integral part of many religious rituals among different religions and spiritual practices and today they’re still used and beloved by many yogis around the world. Discover all about the ancient use and fascinating significance of Mala beads and find out how to integrate them and enrich your daily meditation and yoga practice.

From Buddhism to Hinduism and even Christianity: the practice of using Mala beads for spiritual purposes has always been an integral part of all these three religions since the dawn of time.  And interestingly enough, just like Hindus and Buddhists meditate or chant a particular mantra for each bead, Christians have always used the beads of the Rosary to pray.

Nowadays, this practice is still widely spread amongst religious and yogis as it’s frequently incorporated in a specific meditation called “Japamala”, a wonderful practice that has the power to calm down the mind, reduce stress, and eventually bring the practitioner to a state of pure enlightenment. Moreover, Mala beads are really fantastic and powerful tools that can help us find and maintain a steady focus during our meditation practice the mala because they can truly help us to anchor our attention back to the present moment.

Unfortunately, though, what happens is that, in modern times, Malas are oftentimes also quite misused and abused so that’s why it’s vital to get to know more about their history and significance before in order to give the right respect and credit to this beautiful, ancient object.

Exploring the significance of Mala Beads

These beads were traditionally made with the “rudraksha” seeds, which are the seeds of an evergreen tree widely spread across India, as well as with sacred basil herbs, woods, or gemstones. Originally, mala beads are made of 108 beads and the largest bead in the center is also known as the “guru”, which is said to encapsulate the energy created during the practice.

There are several reasons as to why Malas are composed of 108 beads:

As we’ve said, the act of counting Mala beads is common to many traditions but it’s also part of an ancient practice that has its main roots in Buddhism and Hinduism. In both these religions, Mala beads were used for a specific type of meditation, the Japamala, which combines the counting of beads with the recitation of a so-called “Japa”, a particular mantra, or other sacred sounds.

Originally it was said that only the most devoted practitioner after practicing Japamala while taking 108 breaths could potentially undergo the divine experience of enlightenment. Today this meditation is still widely practiced by many and its use extends also beyond religious purposes. And that is so because a consistent practice of this meditation is proven to have a wide range of physical, spiritual and mental benefits, such as:

How to Use Mala Beads?

Mala beads are usually worn as necklaces to remind you of your dharma, your “righteousness” or purpose. Now, are you maybe thinking about getting your own Mala but don’t like wearing necklaces? Well, if you think that Mala can be worn only as a necklace you might have to think twice because they may actually be worn by practitioners in several ways, just to name a few:

Before start using mala beads remember that there are two golden rules you should always keep in mind when practicing: The first is to never place the Mala on the ground because the tradition has it that positioning sacred objects in contact with the ground is actually a sign of great disrespect.

On top of that, still connected to the tradition of the Malas, you should also ensure you never touch them with the pointing finger because it is originally related to the ego.

So that being said, let’s now explore how to use them step by step:

Finding your Mala for a specific purpose

Now you might wonder: “ how do I choose the right mala for me?”. Well, the thing is that as you can imagine, each mala bead carries its own significance and intention. And every mala can be made using a specific crystal, wood, or a particular mix of herbs that can trigger a certain type of energy in our body, mind, and soul.

So, it’d be ideal if you can discover more about the material from which your mala is made, so as to know what you can really expect from it. For this reason, when browsing for your perfect mala beads, I warmly encourage you to ask yourself: “What is my intention?” “What am I trying to manifest?” “Am I looking to cultivate more balance, more abundance, or more strength into my existence?”

If you’re still confused about what to go for, no worries, we’ve got you covered. Simply take a look at the shortlist of different materials, their effects, and the mantra that could be combined with them:

Furthermore, if you’re looking for some inspiration on where to get your Mala beads, I’d strongly recommend checking out the following websites: they have all sorts of Malas in various ranges of prices in addition to a detailed description of the materials and their effects.

Caring for your Mala

Over time, the seeds of your Mala tend to get darker as they absorb your energies as well as external elements like dirt or dust. For this reason, it’d be better to take special care of our Mala and they all have specific care according to the material of which the Mala is made.

For Malas made of wood or herbs, try to gently wash your Mala occasionally rubbing each bead with a damp cotton swab. Crystal bead Malas will instead need to be cleaned according to the crystal’s main features: some beads simply need to be washed under running lukewarm water, while others may need even extra care. Simply follow the instructions provided by your seller.

Another method that was traditionally used to clean, purify and restore the Mala beads is either with sage or with the so-called “Tingsha cymbals”, some small cymbals frequently used in rituals by Tibetan Buddhist practitioners. Both these ancient methods are said to effectively reinforce your Mala, bringing it back to its original, pristine energy.

So we’ve finally come to an end of our article on Mala beads. In this article, we’ve dived deep into their fascinating history, exploring their deep significance and benefits.

As a last side note, remember that a mala doesn’t need to include fancy or pricey gemstones to be effective, simply try to choose the one that truly feels right to you.

That being said, I do hope this article has shed more light on this beautiful, ancient practice so as to help you find the perfect mala beads for your practice.