Everything You Need to Know About the Solar Plexus Chakra (Manipura, the Third Chakra) 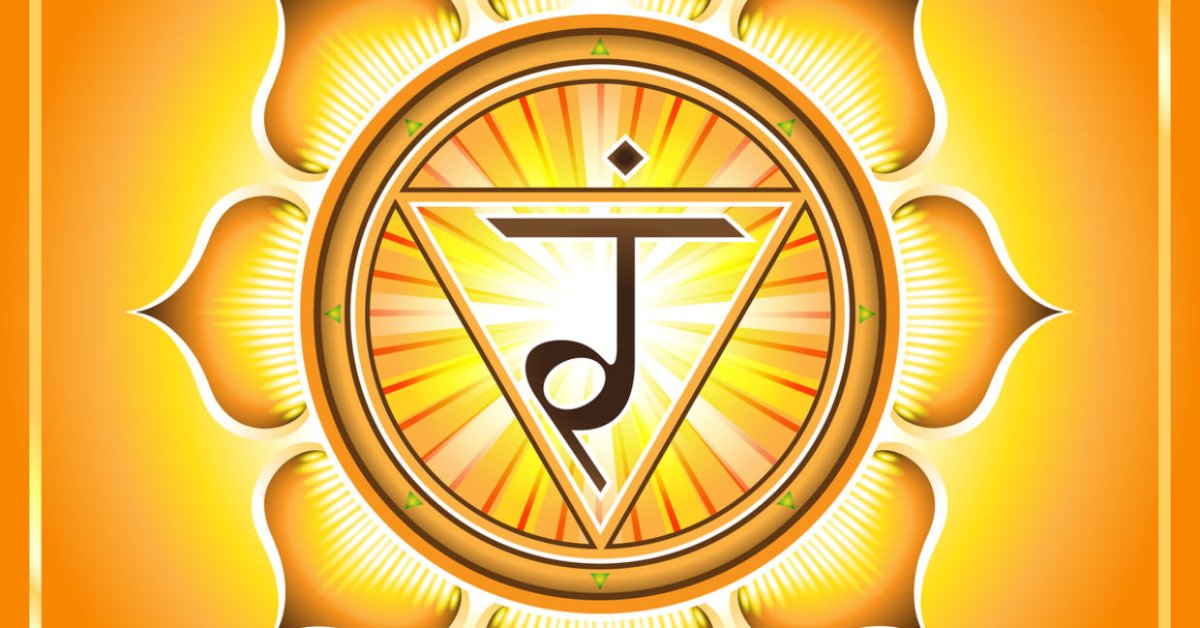 Sitting above your navel in your upper abdomen is your solar plexus (Manipura) chakra, also known as Manipura. It is the third primary chakra according to Vedic tradition, following on from the root chakra (Muladhara) and sacral (Svadhishthana) chakra.

Like each energy center, the solar plexus plays an essential role in our spiritual and personal development. Even so, it seems to be one of the most popular chakras (and is my personal favorite) so let’s find out what makes it so powerful.

The Solar Plexus chakra (Manipura) at a glance

What does Solar Plexus mean?

In anatomical terms, the solar plexus is the network of sympathetic nerves in the abdomen. Its location is behind the stomach, and the purpose of these nerves is to supply the abdominal organs with information. You can easily tell where your solar plexus is, as a blow to this area will create pain from the affected nerves.

Manipura is the Sanskrit name for solar plexus, which translates to “city of jewels” or “lustrous gem.” So what are these jewels? You can see the qualities of this third chakra as the jewels and the solar plexus as their keeper. This energy center contains fiery qualities like confidence, strength, determination, and personal power. So the solar plexus is essentially the city that houses all of this fire.

Location of the Solar Plexus chakra

The solar plexus chakra is located close to the spine and above the navel (belly button). The energy from this center is said to spin in a circular motion from the navel to the breastbone. An easy way to learn the positions of the lower chakras is to remember that the second (sacral chakra) is in the lower abdomen and the third (solar plexus chakra) is in the upper abdomen.

Each chakra is linked to one element, and for the Manipura, it’s fire. The element of each chakra relates to its role and specific power, and the solar plexus’ power is transformation. Its function is to ignite your inner fire and unleash your full potential and personal power. Ancient yogis believe that fire purifies all past karmas, resulting in an awakening of pure consciousness.

The solar plexus chakra is also associated with the sun and is responsible for absorbing and assimilating Prana from the sun. This explains why one of the benefits of opening and strengthening this chakra is increased energy.

Each chakra is associated with a specific color that reflects its unique vibration and frequency.

According to Tantric teachings, the color of the solar plexus chakra is yellow, linking to its association with the sun and the fire element.

Interestingly, in Color Psychology, the study of hues as a determinant of human behavior, yellow conveys competence and happiness. This association is very fitting as these are two qualities you can expect to experience with a balanced Manipura chakra.

Along with an element and color, each chakra has a unique symbol representing it.

The symbol of the solar plexus is a downward-pointing red triangle, signifying the tattva of fire. The triangle is within a bright yellow circle, which has ten petals.

You will see the Sanskrit letter of the chakra’s seed sound RAM within the red triangle. Then, you’ll see Sanskrit letters on each of the ten petals. These letters loosely translate to unhappiness, foolishness, delusion, disgust, fear, shame, deception, jealousy, ambition, and spiritual ignorance.

What role the Third chakra plays in our lives

The function of the Manipura chakra is personal power. The chakra is the center responsible for your level of confidence, self-belief, self-esteem, inner strength, and determination. As it governs your inner fire, you’ll experience high energy and a strong sense of identity and purpose if your fire is powerful.

What the Solar Plexus chakra controls

The solar plexus is our center of vitality, so it controls our energy balance, digestive system, and Agni (fire). The solar plexus sends energy to the digestive organs; however, the energy supply is insufficient when out of balance. This connection is why a person with an unbalanced Manipura chakra may experience digestion issues and low energy.

With a healthy, balanced Manipura chakra, it’s believed you should experience a high level of energy, confidence, and self-belief. You’ll have a determined, resilient attitude, which takes the necessary action to move closer to your goals.

So looking specifically at the Manipura chakra, it is midway between the lowest and highest frequencies. Because there is limited scientific evidence around the chakras, it’s challenging to know the exact frequency each one has. Some people believe the Manipura chakra has a frequency of 364 Hz, while others estimate it to be higher, at 528Hz.

With a healthy solar plexus, you’ll have the confidence and self-esteem to take action and follow your dreams. But what about if your third chakra is out of balance? Symptoms of an underactive Manipura chakra include:

Symptoms of an overactive Manipura chakra include:

How to heal, open and balance the Solar Plexus chakra

So now you understand the role of the solar plexus chakra; what do you do if this energy center is weak or overactive? Here are some tips and tricks for bringing your third chakra into balance. However, bear in mind that there is no scientific evidence to prove these methods work.

One way to work on the solar plexus chakra is to visualize the energy center in your mind’s eye. For example, a popular visualization exercise is envisioning a fire burning in the center of your belly. Another is to imagine you are watching a spinning ball of warm, yellow energy at your navel.

This solar plexus chakra meditation incorporates visualization of a yellow sphere. In the exercise, you envision the globe growing in size and traveling up the spine, eventually filling your entire body with energizing and healing yellow energy.

As yoga and Ayurveda are connected, it is not surprising that yogis believe you can heal and open your chakras with specific food. Although there is no scientific evidence, we know that every food carries a particular frequency.

Therefore, there is no harm in adding the following yellow foods to your diet. But, like with all types of energy healing, it’s all about intention. So, you’ll need to eat a banana holding the thought in your mind that it is beneficial for your third chakra rather than doing it unconsciously.

Some foods that may benefit your third chakra include:

There are various affirmations you can say to yourself daily to help evoke the qualities of the Manipura chakra. Some examples are:

A great way to introduce affirmations into your life is through guided meditations. You can find many meditations aimed at the solar plexus chakra that feature declarations similar to those above. I like to follow this meditation that features many beneficial affirmations to power up your Manipura chakra in under 10 minutes.

In addition to meditation, yoga can be a beneficial practice for balancing the chakras. Specific yoga postures target and stimulate the third chakra, including:

Here are some Manipura-opening yoga postures to ass to your practice:

Furthermore, the yogic pranayama known as Breath of Fire (Kapalabhati in Sanskrit) is said to stimulate an underactive solar plexus chakra.

A mudra is a symbolic hand gesture used in yoga and other Hinduism, Jainism, and Buddhism practices. There are mudras associated with each chakra, and it’s believed that performing these hand gestures will activate the energy center.

One mudra for the solar plexus chakra is the Rudra Mudra, also known as the gesture of strength. It can effectively relieve digestive stress and build your will and inner strength. To perform it, bring the tips of your index and ring fingers to touch your thumb while extending the middle and pinky fingers.

Another mudra associated with the third chakra is the Matangi mudra. This gesture can help relieve anxiety and tension and boost confidence and determination. Try it by bringing your palms together and interlacing your fingers. Then, point both middle fingers up, touching the tips.

Another way to balance your solar plexus chakra is to work with yellow crystals or stones. Each crystal has specific benefits, so you can choose the one associated with the symptoms you are experiencing or the qualities you want to gain.

You can work with crystals in Reiki or energy healing sessions or simply have the stone in your house. Many people like to wear the crystal around their neck or keep it in their pocket to have it closer to their body. Here are some stones and crystals that are associated with the Manipura chakra.

What does the solar plexus chakra do?

The solar plexus chakra allows you to tap into your power and build your inner strength to achieve your goals and dreams. It raises your confidence and self-belief, filling you with self-assurance, determination, and motivation. Essentially a healthy Manipura chakra allows you to take action in the world without any fear or doubt.

What happens when the solar plexus chakra is blocked?

If your solar plexus is blocked, you may struggle to believe in yourself and find the confidence and courage to do things. This is because a blocked third chakra lowers your self-image and weakens your will. In addition, a blocked Manipura chakra results in a lack of courage and heightened fear.

How do you unblock the solar plexus chakra?

How do you unblock the solar plexus chakra?
You can use several tools and techniques to unblock your third chakra. Meditation, affirmations, and yoga postures are three popular techniques. You can also work with the Manipura chakra of yellow by filling your home with yellow things, eating yellow food, and wearing yellow clothes.

What blocks the solar plexus chakra?

Because the Manipura chakra is strongly related to self-image, adverse events and experiences that dent your confidence, such as failures, can block this energy center. In addition, verbal abuse, bullying, and judgments from others lower your self-confidence, too, potentially shutting down this essential chakra.