What Are Chakra Mantras And Why Should You Chant Them? 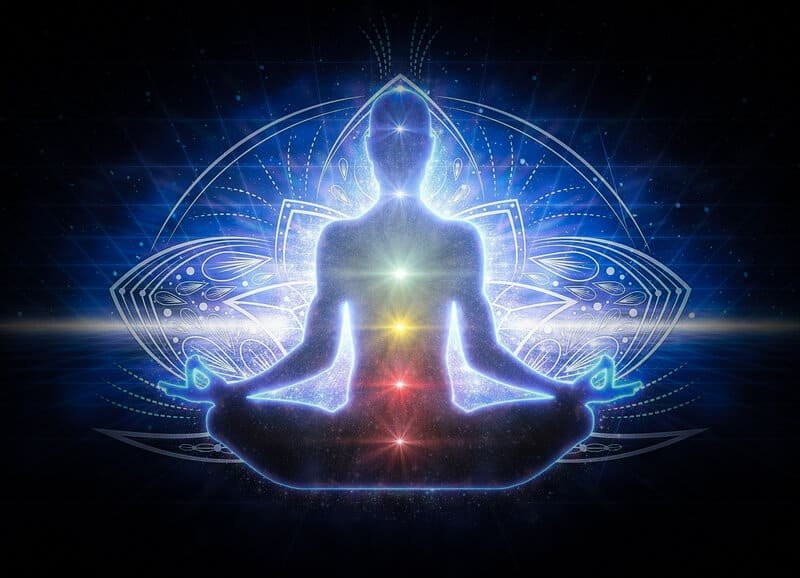 Various yogic techniques are said to activate and align the chakra system. Mantras are one of the lesser-known chakra healing tools in the western world, yet they date back to Vedic times.

Mantras and mudras are most known in yoga, but they have been used in various spiritual practices throughout history. With roots in Hinduism, Buddhism, Tantric rituals, Indian classical dance, and more, mantras and mudras could play a significant role in balancing and healing the chakras.

But just what are mantras, how do they relate to the chakra system, and how can you use them for cultivating healing and inner peace?

Mantra (seed sounds) are sacred vocal vibrations believed to have spiritual powers and positive qualities. The use of mantras dates back to the middle Vedic period (1000 BC to 500 BC), and according to ancient yogic teachings, each of the 7 chakras has a Bija (or Beeja) mantra.

The most widely known mantra is the Sanskrit word “Om.” It is said that Om is the first sound of the universe. Yoga practitioners chant om at the beginning or end of a yoga class as the sound’s vibrations help calm the mind and soothe the soul.

All seven chakra mantras are one-syllable sounds, but other mantras can have multiple syllables. It is said that regularly chanting a chakra’s Bija mantra may help to release any blocked energy there. The sound vibration is incredibly calming to the mind, body, and spirit but the repetition of a mantra helps to bring more clarity and peace of mind, cultivating a meditative state.

Neuroscientists have used advanced brain-imaging tools to study the effects of chanting mantras on the brain. The studies found that Bija mantras can increase our attention span and cognitive control, preventing us from falling prey to distractions.

The best way to chant mantras is during meditation. To enhance the benefits further you can include a mudra, too. Mudras are symbolic hand gestures used in yoga, meditation and other spiritual practices. Mudra is a Sanskrit word that translates to “gesture” and they have roots in Hinduism, Jainism, or Buddhism

Mudras are commonly used in yoga asana and pranayama to increase the flow of prana in specific areas of the body. However, as there are specific mudras associated with each of the seven chakras, it is believed you can activate the energy center when using them with mantras in meditation practice.

The mantras and mudras for the 7 chakras

The chakra mantras are known as seed or bija mantras, which are core sounds that connect to the qualities of each of the seven chakras. It is best to speak or sing these mantras aloud as vocalising them creates the unique healing vibration. However, even murmering them or reciting them silently is beneficial.

Here is a brief overview of the mantras for the seven chakras. Chant them slowly at the beginning of the exhale, allowing the sound and vibration to continue until the breath is finished. Then take a new inhale to prepare for the next round.

Let’s discuss the specific mantras for each of the chakras in further detail, along with the associated mudra for each one.

The Bija mantra for the root chakra is Lam, which helps feel more grounded and connected to the earth element. You can chant Lam to release any fear or insecurities blocking this chakra. Moreover, chanting Lam while listening to meditation music with the 396 Hz frequency can increase feelings of security, prosperity, and belonging.

While chanting, practice the Muladhara mudra, as shown below. The Muladhara mudra is said to invoke the goddess Sakini related to this energy center. It also stimulates the elimination organs associated with the root chakra and dispels any disease or toxicities there.

The Bija mantra for the sacral chakra is Vam, which improves self-image and feelings of worthiness, particularly around sexuality. You can chant Vam while listening to meditation music with the frequency of 417 Hz to open up this center, increase creativity, and cultivate better self-expression.

While chanting this Bija mantra, hold the Shakti mudra, as shown below. The Shakti mudra is associated with the Svadhisthana chakra and the water element. It has a calming effect on the mind, nervous system, and the pelvic area where the sacral chakra is related. It is particularly beneficial for relieving menstrual or pelvic pain.

The Bija mantra for the solar plexus chakra is Ram. Chanting Ram in meditation with 528 Hz vibrations can stabilize an overactive or underactive Manipura. If underactive, the mantra Ram will increase your confidence, self-belief, and the fire element within you. Or it will help you control negative impulses and exercise greater self-control if it is overactive.

The third chakra mudra is the Rudra mudra (the gesture of strength), as shown below. This hand gesture can help relieve digestive stress, which is a physical symptom of an unbalanced Manipura chakra. Practicing this mudra can also help build your will and inner strength, two essential qualities of the third chakra.

The Bija mantra for the heart chakra is Yam. If you repeatedly chant Yam, you can cultivate the positive qualities of the Anahata chakra, like love, compassion, and understanding, connecting to the air element. The mantra can help you overcome relationship difficulties and open a closed heart and is most beneficial when used in meditation with 639 Hz frequency music.

The Padma Mudra (Lotus Mudra), as shown below, is associated with the heart chakra as it is known to promote unconditional love to all beings. Therefore, this hand gesture can help you open your heart, let go of grudges, and purify any negative emotional energy to experience more harmonious relationships. Furthermore, as this hand gesture promotes self-love, it could also relieve feelings of loneliness and isolation.

The Bija mantra of the throat chakra is Ham. Because this chakra governs the throat and voice box, creating vocal sounds through chanting is extra beneficial for this chakra. Chanting Ham can help release stagnant energy in the throat and increase the life force here. This can help you communicate better and release fears around self-expression. Chant ham while listening to meditation music with a 741 Hz tone.

The Granthita Mudra, as shown below, is connected with the throat chakra. It carries the power to nourish your throat and thyroid, healing any physical ailments caused by an underactive Vishuddha. Holding this gesture while chanting will give you the confidence to speak your truth.

The Bija mantra for the third eye chakra is Om (Aum). This powerful mudra can radiate energy up the chakra system to the higher energy centers and raise your consciousness. In addition, Om can help clear your mind, allowing you to experience more clarity and see things from different perspectives. Play 852 Hz meditation music in the background when chanting om for the Ajna chakra.

While meditating and chanting, hold the Gyan mudra,  as shown below, to send energy to the Ajna chakra and increase mental concentration. The Gyan mudra is one of the most well-known meditation mudras used in various spiritual traditions.

The crown chakra shares the same mantra as the third eye, Om (Aum), the first sound of the universe. Chanting Om while listening to meditation music with the 963 Hz frequency can help to raise universal consciousness and connect to your true self. Alternatively, some people prefer to practice silence over chanting for the crown chakra, as they find it takes them into a deeper meditative state.

The crown chakra symbol features 1000 petals, and the Sanskrit name of this chakra, Sahasrara, translates to “thousand-petaled.” Practicing the Thousand Petals mudra, as shown below, can serve as a gateway to transcendence and the divine.

If you’re looking to heal and align your 7 chakras, try including Bija mantras and mudras in your meditation practice. You don’t have to be an advanced yogi or Sanskrit expert to chant mantras, as you can follow along with a guided chanting chakra meditation. Then, with a little bit of practice, you can include a chakra mudra and enhance the benefits further.