Unalome Meaning in Yoga & Spirituality: Everything You Need to Know about the Unalome Symbol 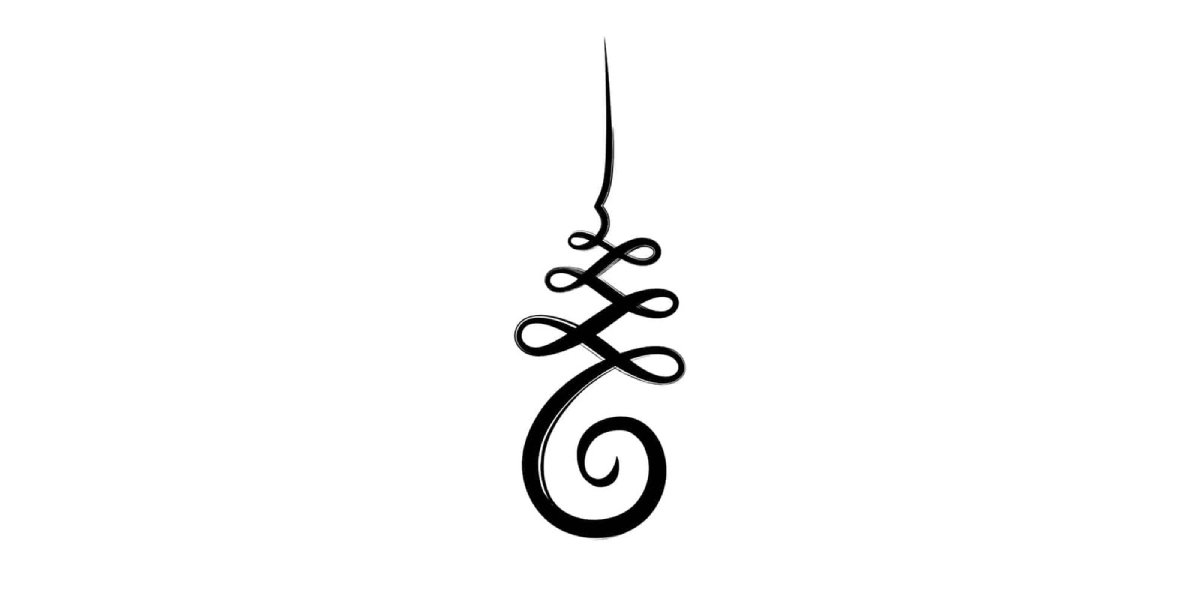 In yoga and meditation, spiritual symbols bring us more concrete understandings of abstract philosophies. They add depth to our yoga practice and bring poignant lessons from ancient spiritual beliefs.

The ornate and elegant unalome symbol has become particularly popular in recent years. Many yogis and spiritual practitioners can relate to this a universal representation of overcoming the cycles of suffering and embracing one’s unique journey through life.

But what is the unalome meaning in Hinduism, Buddhism, and yoga? Is it offensive to get a unalome tattoo? Here is everything you need to know.

What is the Unalome?

If you have been in the yoga world for a while, you will probably recognize a common Buddhist symbol called the unalome. This simple, elegant symbol holds within it a whole philosophy of human existence. It is recognized by a base spiral, a series of looping curves, and then a straightening line typically crowned with 3 dots. UnalOme tattoos and emblems are often accompanied by a lotus flower or Om symbol as well.

Whether adorned on our yoga mats, tattooed on our bodies, or displayed as art in our environment, the unalome symbol is a reminder of universal truths that:

What does the Unalome mean?

In its most simplified form, the unalome symbol represents the path to enlightenment or to a higher place of spiritual contentment. It embodies our experience as human beings on Earth and signifies a deeper awareness of how we move through life and learn from our actions.

For those who practice yoga in search of a calmer mind or a sense of inner peace, the unalome is a particularly relevant symbol of the journey it takes to get to that state. It can be seen as a metaphor for overcoming challenges both on and off the mat.

Whether big or small, when we are presented with daily struggles, the unalome is a reminder that every trial and tribulation is for our greater good.

The path toward accomplishing your goals is never going to be straightforward or simple. Yet somehow, after all the twists and turns, the unalaome shows us that the winding road eventually straightens out and leads us to a place of happiness and fulfillment. Even when we can’t see it in the moment, each curve in the road holds a special lesson for personal and spiritual growth.

So even when life is hard or you experience suffering, the ancient unalome symbol means that each person’s path is uniquely beautiful. Your journey through life is special and important in the grand scheme of the world. We are all ultimately being lead to a place of greater peace as long as we continue to work on improving ourselves.

Different Meanings of Unalome in Buddhism and Hinduism

From its Buddhist and Hindu origins to its modern day uses in yoga, tattoos, jewelry, and art, the unalome remains a universally relevant emblem representing a journey toward a higher way of living. This sacred symbol has likely been used in Eastern religions for many thousands of years.

The symbol embodies many different spiritual philosophies, but you don’t need to subscribe to a certain religion or belief system to embrace the lessons of the unalome. Here are its different interpretations in Buddhism and Hinduism.

Meaning of the Unalome in Buddhism

The Buddhist religion is practiced all over the world, specifically throughout Southeast Asia and the Indian subcontinent. With over 500 million followers, this ancient religion operates on the core principle that the sole purpose of life is to end suffering and work towards attaining enlightenment. Yoga and meditation can be used as tools on this path.

Buddhist beliefs overlap with many foundational elements of yoga, however the two philosophies are not exclusive to one another. The unalome is relevant to both practices.

In Buddhist culture, the unalome represents a person’s journey through life toward the ultimate freedom of mental clarity and enlightenment. It is a visual metaphor for working through human entanglements on the path to spiritual fulfillment.

Meaning of the Unalome in Hindu Religion

In Hinduism, the unalome symbol actually characterizes the third eye of Lord Shiva. A key deity in the holy trio of Hindu religion, Shiva is often called “The Destroyer” because he is known to help remove obstacles from people’s lives. He is considered a Protector of the universe and a core symbol of morality.

Like the Buddhism unalome, the Hindu interpretation of this symbol represents seeking wisdom and undertaking a spiritual path in life.

The unalome reminds Hindu followers that you must discover your own way in life but each spiritual milestone (along the upward spiral) will ultimately bring you closer to moksha (perfection or enlightenment). In the Hindu unalome, moksha is symbolized by the straightening of the line and your final release from cycles of rebirth thanks to good karma and spiritual devotion.

Untangling the Symbolic Meaning Behind the Unalome

Like the Om symbol and many other yoga emblems, the unalome holds specific meanings and metaphors in each part of the shape. The lines and dots are strategically designed to represent important lessons in East Asian philosophies.

The path begins in a curving, tangle at the bottom of the symbol. This base spiral represents birth or the beginning of a spiritual awakening.

According to both Buddhist and Hindu philosophy, we are each put on Earth to fulfill a specific dharma or purpose in life. Ancient yoga texts such as The Vedas describe finding your dharma as your personal mission to discover your divine calling, or how you will put your unique gifts and talents to work to serve the greater good of humanity.

Regardless of which way it faces, the spiraling shape is of particular importance because it is also a metaphor for the initial confusion of human life.

In Hinduism, this concept is called maya, which is a Sanskrit term meaning “magic” or “illusion”. There are many illusions, blockages, challenges, emotions, and dramas that often cloud our minds while on the earthly plane. In the midst of our daily lives, we are easily blinded from seeing the spiritual truths of the world.

Many people become lost in this spiral of societal norms or superficial living. They must find their way out of the labyrinth in order to begin the path upwards toward a more fulfilling or enlightened existence.

The Loops of the Unalome Symbol

Next comes the beautiful lines curling upward from the base. The curves and loops that make up the center of the unalome symbol represent the inevitable obstacles and challenges of one’s journey. They can also symbolize spiritual or age-related milestones as a person grows older and wiser.

The path unfolds like a meandering mountain road: full of bends, curves, and unpredictable turns to remind us that healing, learning, and growing are never linear.

Though it’s often easier to settle for instant gratification or an easier path that avoids inner work, the loops of the unalome are a reminder to react appropriately to life’s ups and downs. It is essential to keep moving forward to reach enlightenment or what ever goal you have placed up ahead.

The Straight Line of the Unalome

The straight line of the unalome symbol represents an ultimate desire to reach a level of higher consciousness. It indicates an alignment between oneself and a divine purpose in life. It means you have worked diligently to separate yourself from the ego, self-centeredness, greed, and shallow desires.

This point of higher wisdom can be associated with opening the third eye chakra. It signifies an alignment between your thoughts, actions, and inner truth. It very literally shows a disentangling of the loops of challenges and obstacles of life.

This part of the unalome symbol is a metaphor for both hope (that you can escape the cycles of suffering) and celebration (that you have worked diligently to gain your footing on the path toward spiritual release). However, the journey is still not complete.

The Dots of the Unalome

The final design of the unalome includes three dots that symbolize enlightenment. These dots depict a reaching of your goals and finding an ultimate meaning to one’s journey.

Many unalome tattoos have one or more dots, however the most common depiction of the unalome includes the sacred number of 3 dots, often precluded by the sacred syllable, Om.

Whether your end goal is a state of nirvana or just a sense of inner peace, the final dots of this meaningful symbol embody liberation from earthly suffering.

Meaning and Symbolism of the Unalome Lotus Flower

You’ll often see unalome tattoos and designs with a lotus flower at the base or center of the symbol. The lotus flower is a significant symbol for purity, beauty, and overcoming barriers.

A lotus plant grows in muddy, murky water that is often hidden from the sun. Yet somehow, when the lotus flower emerges, it pushes through all the muck and defies all odds to bloom a beautiful flower. This Buddhist symbol is a metaphor for our struggles in life as we work our way through darkness into light and beauty.

Adding a lotus tattoo to unalome designs ultimately emphasizes finding beauty amidst ugliness or negativity. In a unalome tattoo, other variations of the lotus flower can embody an individual’s transcendence, self-regeneration, and rebirth.

Is an Unalome tattoo offensive?

Like many Buddhist symbols, unalome tattoos have become increasingly popular thanks to their elegant, aesthetically-pleasing appearance and universal symbolism. While this is a sacred emblem in the Buddhist religion, is not exclusive to Buddhist followers. As long as you are respecting and honoring this ornate symbol, there is no evidence that getting a unalome tattoo is offensive.

Should Unalome face up or down?

A unalome tattoo traditionally starts with the spiral at the base and faces upwards as a symbol of moving up toward enlightenment and a higher state of being. Depending on the body placements, a unalome tattoo ideally remains facing upwards toward the third eye chakra. This embodies the journey to aspiring for a higher level of consciousness. Facing the unalome downwards could be interpreted as the opposite intention.