The Deeper Namaste Meaning in Yoga + When, Why, and How to Say Namaste 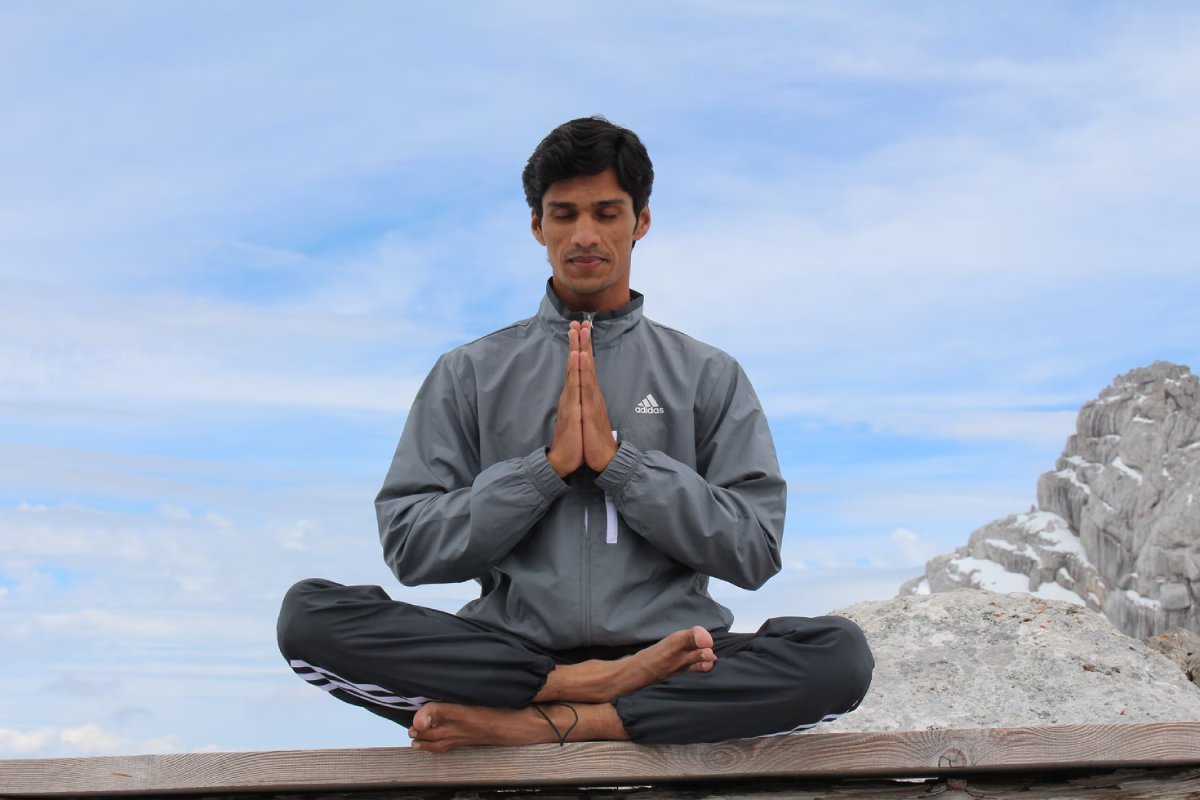 At the beginning or end of a yoga class, you’ve probably heard yoga instructors use the word namaste. With palms touching at your heart center and head slightly bowed, students respond with this ancient Sanskrit term in unison.

In the West, this widely used yoga term is often misunderstood by yoga students and teachers alike. In Indian culture, namaste is a simple greeting with a deeper meaning and spiritual backstory.

But what is the true meaning of namaste? Is it appropriate to use in your yoga practice?

Here is everything you need to know about this ancient phrase, including how to say it, when to use it, and why it has become so ubiquitous in the world of yoga.

How to Say Namaste

Namaste is commonly pronounced nah MAH stay in the English language, however the Hindi pronunciation sounds more like nuh MUH stheh. English speakers tend to emphasize the shorter “a” sounds which native speakers pronounce as a short “uh” sound.

Either way, namaste is a compound word that that is pronounced with three distinct syllables. It is most often accompanied with the hands pressed together in the prayer position.

What does namaste mean?

In its simplest form, namaste means “I bow to you”. It is a common greeting similar to “hello”, and is often used in formal or respectful situations, but can also be incorporated into daily interactions or spiritual practices.

In its literal sense, the word namaste translates to “bow to you”. It comes from the Sanskrit root words, namas, which means “bow” and te, which means “to you”.

Namaste is a salutation or bow to the divine soul of fellow humans. This ancient term is often used as a positive message to end a yoga practice. It can be accompanied with other interpretations such as:

It is an ancient Hindu belief that all beings are created equally, or in other words, the divine is equally present in everyone. Namaste embodies this “we are one” mentality.

Whether used as a greeting or a yoga salutation, namaste creates this feeling of mutual respect and honor. It levels the playing field to demonstrate that you see yourself as an equal to the person you are bowing to.

Where does namaste come from?

Use of the word namaste goes back thousands of years to The Vedas. These are the ancient scriptures of Hinduism that laid the groundwork for much of yogic philosophy.

Namaste was one of the most common traditional greetings used in these holy texts (along with ‘namaskar’, ‘namaskaara’, and namaskaram’). Over the course of millennia, namaste has been incorporated into daily rituals of greeting others. Whether young or old, stranger or friend, the namaste gesture is a way of respectfully greeting a fellow human being.

Today, namaste can simply mean “hello” or it can signify a deeper connection to the essence of eastern philosophy.

Today, namaste holds true to its ancient holy roots, yet can also be found in modern yoga studios and yoga accessories throughout the United States.

Namaste has become a sort of catchphrase for the Western yoga world, but some devout yogis have begun to question if it is respectful or appropriate to use by non-Hindu yoga practitioners.

How did namaste come to America?

When Swami Vivekananda first brought yoga philosophy to America in the late 1800s, the term namaste probably came along with the Hindu traditions he taught.

As gurus like Paramahansa Yogananda and and Indri Devi expanded the popularity of yoga in in the 1920s-60s, namaste became more widely used in yoga classes alongside the Sanskrit terms for different yoga poses.

Why do yogis say namaste?

It is unclear exactly how the term and gesture of namaste transitioned from a common greeting to a meditation, a “thank you”, or a “goodbye” in yoga classes.

As we explored above, this Sanskrit word namaste translates to “I bow to you”. However, the root word namaha can also be interpreted as “na ma” or “not mine”. This also holds great spiritual significance in the Vedic texts because it negates or sets aside the ego as a means of respecting another person.

In yogic philosophy, this secondary interpretation of namaste is particularly poignant. It points to the work of overcoming the obstacles of ego (ahamkara) mentioned in Patanjali’s Yoga Sutras. After all, yoga is far deeper than just the physical asana practice.

So, when we do a slight bow of our heads at the end of a yoga class, we are signifying humility and a dedication to reducing our ego-centric views on the world. We are essentially saying “the divine in me honors the divine in you”.

Is it OK to say namaste?

If namaste is just a Hindu greeting like “hello”, why are some people so upset by its use in western yoga classes?

Although some people believe that the term namaste has been co-opted and misused by the American yoga community, one could also argue that modern use of namaste in yoga classes can help practitioners expand beyond the physical realm of asana and focus a bit more on the spiritual practice of yoga.

Namaste is a reminder that yoga is more than just poses, yogi abs, and Lululemon pants. Regardless of one’s religion, it is a means of showing respect to the divine love of the universe.

The word namaste is almost always accompanied by a slight bow and pressing hands together in a prayer position at the chest. The palms and the pads of each finger presses into eachother, including the edges of the thumbs and pinkies. In Sanskrit, this posture is called pranamasana and the hand gesture is called anjali mudra.

Sometimes called “prayer hands” or “namaste hands”, the anjali mudra symbolizes a return to the self in the present moment. It is a mudra of concentration, balance, and salutation.

Where does the anjali mudra come from?

This mudra (hand position) likely came from the original myth of the birth of Hindu mystic Patanjali, author of The Yoga Sutras.

Patanjali’s mother, Ananta, was a devoted yogini who wanted to birth a son to pass on her wisdom, but could not get pregnant. One day, she was praying by the river with her hands in the anjali mudra. She placed her hands into the water and when she brought her hands back up, the baby Patanjali appeared in her grasp.

What is the meaning of the anjali mudra?

Ananta’s faith in God and devoted practice of yoga is represented by the baby Patanjali being born into her hands. The name pat means “to fall” and anjali references the prayer-hand gesture. So Patanjali fell into her palms in order to expand the philosophies and practices of yoga to the world.

Regardless of your religious beliefs, the namaste gesture is used today as a simple means of reconnecting to the spirituality inside each of us. Placing the prayer hands by the heart chakra is a holy reverence to the divine spark of love believed to reside within everything in the entire universe.

Bringing together the two sides of the body- the right and left, the yin and yang, the inner and outer selves, man and nature, the mind and body- creates a sense of wholeness. After all, the Sanskrit term yoga or yuj means “to yoke” or “to unite”. This practice is about removing duality and finding peacefulness in seeing the “oneness” of all things.

When and How to Use Namaste in Your Practice

Namaste creates a link from the physical practice of asanas back to the spiritual and ethical roots of yoga as a holistic philosophy. However, you may only feel comfortable using it in the proper time and place.

In India, namaste is used on a daily basis, but Americans aren’t often found bowing to each other when they say hello on the street (keep in mind that there are no precise scriptures saying this is disrespectful or prohibited, it is simply not a common cultural practice like it is in India).

The most important thing to remember when using namaste is to maintain a sense of sacredness and respect when using it. The same is true of prayer hands in Christianity or Islam.

As long as you aren’t disrespecting or dishonoring the word namaste, it can be incorporated into your daily spiritual practices in a way that feels right to you.

When do you say namaste?

The most common time to use namaste is at the end of a yoga class. The teacher will often cue the word and the mudra after the last pose, just before moving into Savasana (Corpse Pose). Though it may feel like you only completed a simple yoga class, namaste honors that it was more than just an hour on the mat. You showed up for yourself, honored your needs, and fostered a deep respect for your own body and spirit.

In this setting, namaste means both an ending and a beginning. You can take the stillness and focus you cultivated on the mat out into your daily life. It is a symbol of peace and a greater understanding of the role you play within the world. You may choose to say namaste silently or out loud, depending on the setting.

When should you use the namaste gesture?

In India, the namaste gesture is also part of a standard greeting practice or a goodbye. The small bow is a sign of respect and honor to another person.

In a yoga class, instructors may use this gesture during specific breathing exercises, poses, or meditations to bring students back to the collective experience of practicing asana together.

You can place your hands at heart center before, during, or after your meditation yoga practice to help return to your own center and feel grounded in yourself at a given moment.

Is namaste a polite word?

Namaste is a Sanskrit word meaning “I bow to you” or “I honor you”. It is a very polite way of greeting somebody and expressing respect for their similarities to you as a fellow human.

Is namaste hello or goodbye?

In Sanskrit, namaste is most commonly used as a respectful greeting, but it can also be used to say goodbye or end a yoga practice with a sense of reverence and respect.