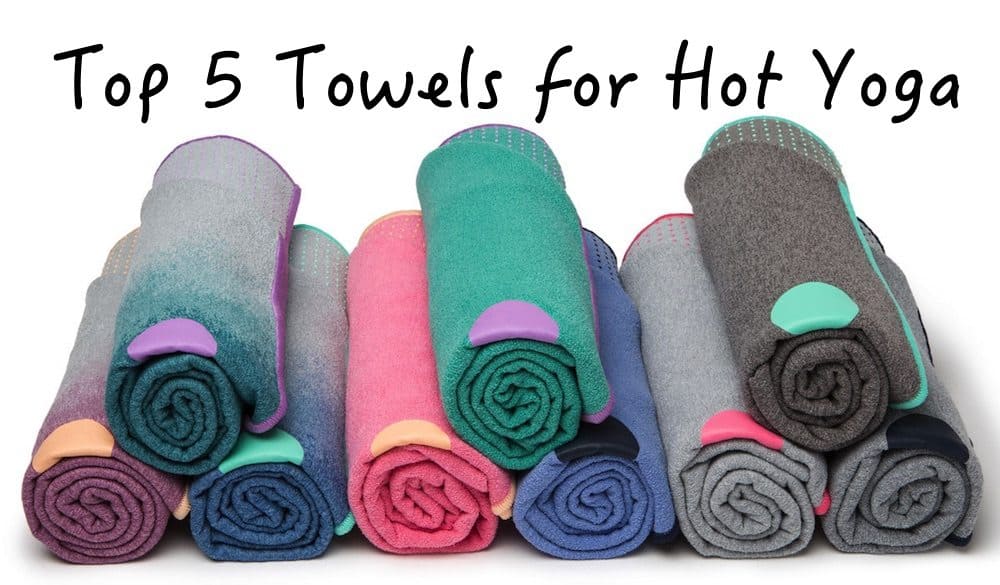 *This article compares towels for hot yoga. If you’re looking for more yoga gear, check out our reviews for traveling yoga mats or carry on backpacks or yoga backpacks for commuting to the studio?.

Looking for the best yoga towel for hot yoga to prevent you from slipping during class?

There are tons of yoga mat towel options to chose from. Luckily we did the research for you and narrowed it down to the top 5 towels for hot yoga.

What was I looking for in a hot yoga towel?

Anne and I have been practicing yoga for a combined 14+ years and have tried out countless yoga products.

This guide was designed to make choosing the right yoga towel for hot yoga a breeze! (or at least give you a starting point).

At the end, I will share which towels we use. However depending on your specific needs, any hot yoga mat towel we list below will get the job done.

Pin me! Then keep reading 🙂

Alright lets move on to the individual yoga towel reviews… Yogitoes Skidless yoga towels are one of the most well known in the world of hot yoga. These towels are made with microfiber and contain little silicon grips to keep your towel from bunching up. I love and recommend this towel for most types of yoga (Bikram, Hot Series, Yin, etc). However, the price is on the high side for the towels reviewed here. One of the cheapest hot yoga towels on the market. There is something great about the no frills design of the YogaRat towel. This is Anne’s personal favorite for any type of heated yoga – just make sure you get it damp before practice! (We recommend using a spray bottle to dampen hand and feet placements). Definitely a good value microfiber yoga towel. It’s no secret that Manduka makes premium yoga products. Their flagship hot yoga towel is yet another great product. Priced very well ($34). Personally I think this is the best value of the non slip yoga towels we reviewed. I use this towel for any heated vinyasa class and it’s my go to travel towel. The new-comer to the hot yoga towel world! This is no ordinary yoga towel – Intention has a trick up there sleeve! They offer “corner pockets” to secure the towel to your favorite yoga mat. These corners prevent the towel for bunching up. Great design, it has a 5 star rating on Amazon, and it’s the least expensive towel we reviewed!

If you usually practice on a larger mat this towel could make sense for you. Although this is my least favorite towel on the list, it is be the best option for people who want a no slip yoga towel AND want extra padding. With the extra support it offers, the Kulae hot yoga towel is also much bulkier which some people (including myself) do not love. It comes with only one color option (gray) and is the most expensive on the list.

What about the hybrid yoga mat + towel combos?

There are a few companies trying to create a hybrid yoga mat and yoga towel combination. In my onion that is a challenging task. It would need to have a sticky yoga mat texture on the bottom, and an absorbent, non-slip, towel-like surface on top.

I was skeptical of these products and here are a few questions I had right away:

Luckily, we did find one product that nailed it!

It’s a beautiful product with great colors/designs and performs great! Great for any sweaty yoga practice and can be machine washed when needed. It also comes with it’s own carrying strap. Great reviews on Amazon (4.5 stars out of 5).

Do I really need a “yoga towel?”

You might be asking yourself, what is a yoga towel? Can’t I just use a normal towel? Or no towel at all.

Well, technically you can. If you only practice yin yoga, aka you never sweat during yoga, a yoga towel will offer nothing besides a little extra support. If you do hot yoga, you need a towel to prevent slipping which can cause injury.

Benefits of a towel for hot yoga

What about a regular towel?

I understand, you want to save a few dollars and use your old towel sitting in the closet. You CAN do this but it doesn’t work very well. Regular towels don’t stick to your mat which leads to bunching up. If your towel is bunching up, you’ll be constantly adjusting your towel.

Laslty, you can also go for a hot yoga mat and towel in one combo. For example, the Yoga Design lab Combo Mat which is a solid option. Personally I prefer keeping my yoga mat and the best non slip yoga towel I can afford separate.

*Bonus: a yoga mat towel also works great for a travel towel! See what else Anne packed in her bag for travel.

What towels do The Yoga Nomads use?

Brandon: I think the best yoga towel is the Manduka eQua which I use for most yoga classes and for travel. It’s also the best yoga towel for sweaty hands that I’ve used. Let’s be real, my hands get extra sweaty the second I walk into a heated studio. Sometimes I do use my Yogitoes when practicing the “Hot Series” from CorePower (resembles the Bikram series). Side note: some people think a specific bikram yoga towel, however I think that’s a bit crazy 😉

Did you enjoy this article? Pin me!

Are you a yoga teacher?

This guide shows our proven step-by-step system for creating a yoga website you love. If you’re a yoga teacher, snag this guide for FREE.